Friday night, I discovered that on his Electronic Intifada blog, Ali Abunimah had put up a post claiming that Likud leaders were planning to go to Al-Aqsa early Sunday morning and that they were calling for “cleansing” Jerusalem and building a Jewish temple instead of the mosque. At the bottom of the post, Abunimah added an update that half-heartedly acknowledged that there was no basis to the story, but he nevertheless concluded by claiming:

“There’s certainly no doubt that whoever published this flyer […] is tapping into a history of calls and growing support for destroying Al-Aqsa. Feiglin’s supporters too are clear about their desire to take over the Temple Mount.”

In response, I wrote a post pointing out that spurious claims about Jewish threats to the Al-Aqsa mosque had been used by Arab agitators for almost a hundred years: it was the notorious mufti Haj Amin al Husseini who first used this libel in the 1920s. In the almost 100 years that have passed since then, it was of course only sites sacred to Jews that were desecrated and destroyed in Jerusalem.

When I wrote this post last night, I noted that Abunimah’s post had about 100 tweets and some 150 Facebook endorsements. Some 24 hours later, it had 381 tweets and 523 Facebook “likes”, and there were the beginnings of a Twitter intifada: word of the evil designs of the wicked Likudniks had reached the popular Egyptian-American writer Mona Eltahawy, who send out a tweet about it – and she has more than 100 000 followers…

Luckily, by that time, Anne-Marie Slaughter, former Director of Policy Planning at the U.S. State Department and professor at Princeton, had also gotten word of the story and found out that it was a hoax. Realizing that it was a very dangerous hoax, she sent out multiple tweets to alert her more than 20 000 followers.

Mona Eltahawy quickly deleted her original tweet and also helped to get out the message that it was a hoax, but by that time, the Al-Aqsa libel was already spreading like wildfire. As one tweet by a professor of sociology put it: “Scared of all the fake rumors about Al #Aqsa. First rule of sociology is if enough people believe something, it will have real consequences.”

Maybe Ali Abunimah will be pleased by the thought that just like with his #IsraelHates- campaign, he once again managed to cause a stir in the Twittersphere – and this time around there was even the specter of going from a merely verbal “Electronic Intifada” to a real intifada of senseless violence and bloodshed. 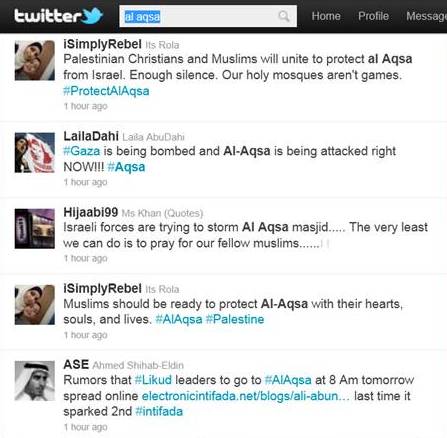 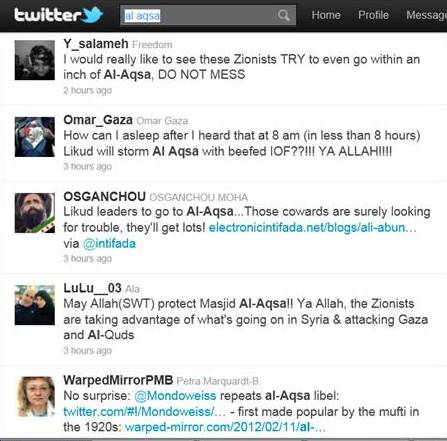 This is a slightly different version of a post at my JPost blog.

Elder of Ziyon quotes my post and adds several examples documenting the relentless attempts to incite hatred and violence against Israel with fabricated stories:

The Al Aqsa Heritage Foundation and various Muslim firebrands are well-known for creating false rumors about supposed Israeli designs on the Temple Mount. They do it practically every week on their website, and many of those make it into the mainstream Palestinian Arab press. Here are just a few I have documented over the years:

April 2009: Israel is building a subway to the Temple Mount

June 2009: Netanyahu is planning to build the Third Temple

September 2009: Israel will give exclusive access to Jews to the Al Aqsa Mosque for 50 days a year

February 2010: Cracks on the Temple Mount is from Israeli construction and plans to destroy it

Some very interesting additional material can be found in a post with the great title “Liar Liar, Mosque on Fire” by Zionist Shark at IsraellyCool: There is a very useful aerial view of the Temple Mount, and a link to an article by Mordechai Kedar who explains how Jerusalem came to be seen as holy by Muslims.