EXCLUSIVE!!! New GraSS poem: Not Peeling the Onion in Iran

The news out of Germany is that Nobel Laureate Günter Grass continues to crave the kind of attention he got a few years ago when he revealed in his autobiography Peeling the Onion that he had served in the SS.  Earlier this year, he managed to cause quite a stir when he published an awkward “poem” warning the world about the terrible danger posed by a belligerent Israel that was unduly worried by Iran’s nuclear ambitions. Now he’s trying to do it again: Grass has reportedly published a new volume of “poetry” that includes not only a slightly revised version of his anguished warning from spring, but also an ode to Mordechai Vanunu, a former Israeli nuclear technician who served a long prison sentence for revealing details of Israel’s nuclear program to the British media in the mid-1980s.

There is no doubt in my mind that future editions of this poetry volume will include a poem that Grass must be working on right now – after all, how could he ignore the onion-themed bonds between himself and Iran??? 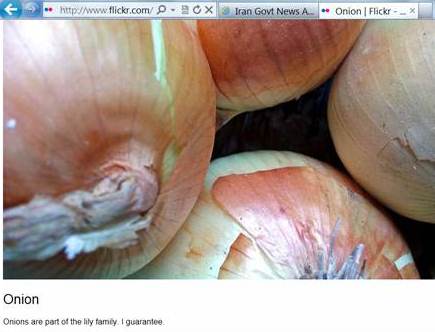 In case you haven’t heard that Iran’s FARS news agency recently failed to realize that an exciting poll from the satirical news magazine The Onion was too good to be true, here’s Walter Russell Mead’s take on this incident:

“Surreal is how many people around the world describe the situation in Iran: one of the world’s great and sophisticated cultures under the rule of backward-looking mullahs who think stoning adultresses, hanging homosexuals, threatening Israelis with annihilation and building a bomb is all in a day’s work. Complete with a hate-spewing, Holocaust-denying demagogue who thinks he’s the chosen instrument of God — though he was rejected by Iranian voters in the last election — the group of clowns, thugs and religious zealots in charge of Iran looks like something out of a satire by Swift or Voltaire.

Distinctions between reality and illusion are not always clear in contemporary Iran; the latest evidence comes from FARS, an Iranian news agency which implausibly claims to be independent of the government. While trolling through western news sources looking for important news, the editors came across a shock Gallup poll: 77 percent of white rural voters in the United States would rather vote for Iran’s President Ahmadinejad than President Obama.”

In the unlikely case that he needs some inspiration, here’s what the Washington Post’s David Ignatius wrote after his recent interview with Iranian President Mahmoud Ahmadinejad:

“But in this third interview I’ve had with the Iranian president, I had the sense that he genuinely believes the world is going Iran’s way. He sees an America that is facing reversals across the Muslim world — in the wars in Iraq and Afghanistan and most recently, in dealing with the Arab uprisings. Close U.S. allies such as Egypt’s Hosni Mubarak are gone, and Ahmadinejad is still standing. […]

The most intractable subject in any conversation with Ahmadinejad is Israel, and Sunday’s discussion was no different. Pressed why he continued to make comments that Israelis regarded as hate speech, he parried back with a series of questions about Israeli occupation of Arab territory. Asked to affirm Israel’s existence, he wouldn’t.”

And Günter Grass might note with relief that when it comes to the Zionist entity, Ahmadinejad isn’t as alarmed as the German Nobel Laureate:

“We, generally speaking, do not take very seriously the issue of the Zionists and the possible dangers emanating from them,” he said early in the interview. “Of course, they would love to find a way for their own salvation by making a lot of noise and to raise stakes in order to save themselves. But I do not believe they will succeed.”

The NYT Lede blog reported yesterday that FARS published a sort of apology for running with The Onion story, but also insisted that the satire contained a big grain of truth: “we do believe that if a free opinion poll is conducted in the U.S., a majority of Americans would prefer anyone outside the U.S. political system to President Barack Obama.”

This entry was posted in Uncategorized and tagged antisemitism, Gunter Grass, Iran, Israel. Bookmark the permalink.