* Originally published at my JPost blog on January 26 *

Last Thursday, many Sunni Muslims celebrated the birth of Islam’s founder Muhammad. As the Jerusalem Post’s Khaled Abu Toameh reported, Gaza’s Hamas Prime Minister Ismail Haniyeh announced during a ceremony to mark this occasion that Hamas was planning to establish a “military academy” that would offer training to children as young as twelve. The children attending the school would be able to “graduate with a diploma or a BA in military affairs.”

However, as a widely quoted Associated Press (AP) report indicates, this was apparently not an entirely new initiative: since last September, Hamas has been offering a military training program as “a weekly elective…in all Gaza high schools,” and the ceremony on Thursday included celebrations of the “graduation” of the first 3600 participants:

Hamas officials said the Futuwwa, or ‘Youth,’ program is aimed at fostering a new generation of leaders in the struggle against Israel.”

A fifteen year old graduate of this program quoted in the AP report was enthusiastic:

“My officer taught me the values of courage, sacrifice and love of jihad, as well as some battle tactics […] I feel that I can free my energy in a good way. I can do for real what I do in video games.”

There may well be a connection between this “educational” initiative by Hamas and the efforts mentioned by senior Hamas commander Zaher Jabarin in a recent interview with Hamas’ Al-Quds TV. In the interview, Jabarin boasted that Hamas labors “day and night” to educate Palestinian children to become suicide bombers.

“There was training of the divine generation, the true generation of martyrdom-seekers, through which we can participate in the battle. First, before anything else, before any Jihadi action, before the transfer of weapons, money, etc., and everything required for action, first and foremost is the individual person. The Islamic Movement [Hamas] took care of the education of this youngster who will participate in this battle […] We labored day and night to build the person, who will participate in this battle […] The Palestinian youngsters, the resistance and Jihad warriors, fight and quarrel over performing a courageous suicide operation.”

Jabarin emphasized that Hamas was “now preparing for the battle of liberation, and not just the resistance as we have done in the past” – and tellingly, the teenagers “graduating” on Muhammad’s birthday were called “Liberation Vanguards.”

Among the many questions that should be raised in this context is whether the claim by AP that Hamas has been offering a military training program as “a weekly elective…in all Gaza high schools” means that UNRWA – which runs 245 schools for 225,000 students in Gaza – cooperates with Hamas in hosting or otherwise facilitating the military training of teenagers. UNWRA also has a program for donors to “adopt” a Gaza school, and recently, the German government donated 3 million Euros for the construction of two additional UNRWA schools in Gaza. No doubt these donations are well-meant, but they obviously also allow the Hamas-rulers of Gaza to avoid committing resources to the education of Gaza’s children while leaving them free to finance instead “jihad” training for teenagers.

It is perhaps also time that the organizations that are so eager to indict Israel for any harm that comes to Palestinian teenagers in situations of conflict take note of the longstanding and prevalent Palestinian practice to provide children with some sort of military training.

In June 1970, Life Magazine featured a report on “Palestinian Arabs” with a cover photo that showed a group of boys holding what seems to be real guns; the photo was captioned: “The ‘Tiger Cubs’ train at a camp in Jordan.”

The report included another similar photo accompanied by a text explaining that it showed “student guerillas in Jordan receiv[ing] weapons instruction in a tent under the stern gaze of Che Guevara. The course is sponsored by the liberation front.” 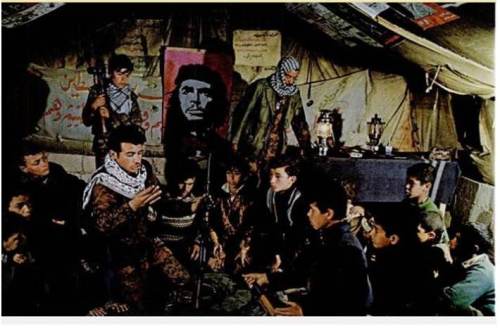 Or consider this revealing testimony, first published in 1985 and reprinted 1998 for a special Al-Ahram series on “50 years of Arab dispossession”: in an interview, Nagi El-Ali, a prominent cartoonist, decries Israel’s 1982 campaign against Palestinian terror groups in Lebanon, but then he boasts:

“I saw for myself how afraid the Israeli soldiers were of the children. A child of ten or eleven had sufficient training to carry and use an RBG rifle. The situation was simple enough. The Israeli tanks were in front of them and the weapon was in their hands. The Israelis were afraid to go into the camps, and if they did, they would only do so in daylight.”

Right: those cowardly Israeli soldiers, utterly shocked when they encounter heavily armed children sent by cynical adults to fight for them… And of course, these adults know very well when to switch from the perverted pride reflected in El-Ali’s recollection – and countless other similar statements – to a display of abject victimization.

To be sure, Palestinian youngsters no longer train “under the stern gaze of Che Guevara,” but otherwise, not all that much has changed: nowadays, they get trained as “Jihad warriors” who proudly graduate on Muhammad’s birthday, indoctrinated to regard it as a privilege to perform “a courageous suicide operation.” The international community makes sure Hamas won’t have other expenses for education and continues to overlook the vicious legacy of decades of determined Palestinian efforts to teach children that violence and terrorism are noble and admirable.

This entry was posted in JPost and tagged Gaza, Hamas, jihad, terrorism, UNRWA. Bookmark the permalink.

5 responses to “The child-soldiers of Palestine”