As widely reported in the news [in early April], hackers from the “Anonymous” group have threatened massive cyber-attacks against Israel on Holocaust Memorial Day. According to the Jerusalem Post, Anonymous boasted that it will “erase Israel from the Internet” by mounting the “largest online assault on a single country in history.”

While Anonymous is supposedly motivated by “pro-Palestinian” sentiments, the date they chose for their attacks is obviously revealing.

But hatred, extremism and antisemitism have long been an integral part of most “pro-Palestinian” campaigns, as is nicely illustrated by this Facebook post of “Activists around the world for Palestine” cheering on the hacking campaign against Israeli sites:

Presumably they felt this image is representative of what they stand for, and indeed one of the comments posted in response is “Death to Israel.”

The group is also currently calling for a “3rd Intifada:”

Unsurprisingly, the “Activists around the world for Palestine” also like to compare Israel with Nazi Germany, as illustrated by this post from April 3, which received 633 “Likes” and 650 “Shares;” as the comments posted in response illustrate, “pro-Palestinian” Jew-haters eagerly seized the opportunity to display their bigotry. 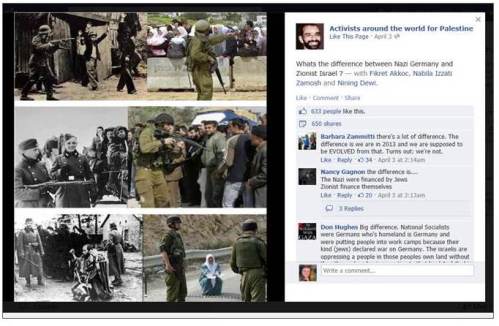 Meanwhile on Twitter, an account that supports Anonymous and claims to provide “news” – which more than 900 000 people find worthwhile following – entertained its fans last night not just with largely fake “success” stories, but also with the lie that last November, an Israeli Minister had threatened the Palestinian with a “Holocaust”. 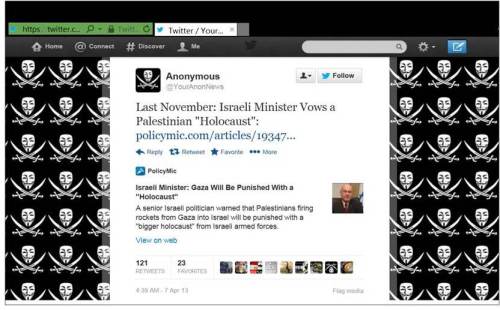 As you can see from the screenshot that was taken some three hours after the tweet was posted, more than 120 people eagerly retweeted these “news.”

It’s an excellent example of the kind of “news” anti-Israel campaigners rely on.

The link provided by the Anonymous “news” tweet leads to a website called “policymic,” where apparently anyone who accumulates enough points from comments can contribute. However, the piece in question was written by the site’s co-founder Jake Horowitz, who claims that he is “trying to spark thoughtful debate on important political issues.”

Horowitz’s post is dated “5 months ago,” and claims that

“A senior Israeli politician warned that Palestinians firing rockets from Gaza into Israel will be punished with a “bigger holocaust” from Israeli armed forces, according to the Telegraph.

Matan Vilnai, deputy defense minister, used the term “shoah” during an interview on Army Radio, a Hebrew word for holocaust typically only reserved in Israel to describe the Nazi holocaust of Jews during World War II.”

But apparently, Horowitz was too thrilled when he came across this story to even notice that the article he linked to was from the end of February 2008, when Vilnai was indeed deputy defense minister and made this comment, which – due to his unfortunate choice not to use another Hebrew word for “catastrophe” – caused an uproar.

Horowitz also failed to update or correct his misleading post, even though several commenters noted that he was regurgitating an article that was more than four years old.

Now, another five months later, Anonymous “news” picks up this fabrication based on a four-year-old report about a stupid choice of words by an Israeli minister and many of their fans eagerly retweet this “news” item. In their weird world, the completely spurious claim that just a few months ago, Israel was threatening the Palestinians with a Holocaust probably provides ample justification for a massive cyber-attack on Israel during Holocaust Memorial Day.

You couldn’t find a better illustration of the kind of “news” that is endlessly circulated among the “pro-Palestinian” haters of the Jewish state.

This was first published on my JPost blog on April 7.

Ultimately, the anti-Israel hackers failed to do much damage, and they certainly failed to deliver on their stated ambition to “wipe Israel off the map of the Internet.” According to a Ha’aretz report, “Fewer than 100 small websites and some 15 large organizations were affected for periods ranging from a few minutes to a few hours.”

The hope expressed by Hamas spokesman Ihab al-Ghussian on his Facebook page therefore didn’t really come true: “May God [Allah] protect the spirit and operations of the soldiers in the electronic war.”

On the other hand, Israeli hackers who responded to the attack were quite satisfied…

This entry was posted in JPost and tagged Anonymous, Israel, pro-Palestinian, Twitter. Bookmark the permalink.