The Palestinians and the Holocaust

In the past few weeks, several reports highlighted the vitriolic backlash that followed a visit by a group of Palestinian students to Auschwitz at the end of March. The controversial visit – apparently the first of its kind – was organized as part of a joint program on Reconciliation and Conflict Resolution with the Friedrich Schiller University in Jena, Germany, and Ben-Gurion University of the Negev and was led by Al-Quds University professor Mohammed S. Dajani.

The media reports on this visit leave little doubt that Professor Dajani reacted to the abuse and threats directed at him with admirable courage and integrity; it is also clear that he greatly inspired the students who participated in this trip. Moreover, the organizers of this program obviously had only the best of intentions. Yet, it is arguably deplorable that nobody seems to have made an effort to use this opportunity to teach the Palestinian students about the collaboration of Haj Amin al-Husseini with the Nazis. As one of the Palestinian students who visited Auschwitz reportedly noted afterwards:  “It is a strange thing for a Palestinian to go to a Nazi death camp. But I would recommend the trip.”

Quite obviously, this student remained completely unaware that when Palestinians visit a Nazi death camp, they have no reason to feel like detached spectators for whom it is somewhat “strange” to come. On the contrary, when Palestinians visit a Nazi death camp, they are following in the footsteps of the man who is nowadays sometimes referred to as “Hitler’s mufti,” and they have the chance to understand what this Palestinian ally of the Nazis saw and what he envisaged for the Middle East after the Nazi victory he hoped for. 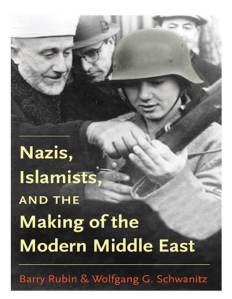 According to the recently published book “Nazis, Islamists, and the Making of the Modern Middle East” by Barry Rubin and Wolfgang Schwanitz, it was either al-Husseini himself or one of his aides and relatives who visited Sachsenhausen in June 1942 together with three other Arab officials (p.2); there is also credible information indicating that one year later, “Eichmann personally took al-Husaini to visit the Auschwitz and Maidanek concentration camps.” (p. 164)

Rubin and Schwanitz also document that at this time, al-Husseini traveled extensively in German-occupied Poland and in early July 1943, he was Himmler’s guest in the Ukrainian town of Zhitomir. As al-Husseini later recorded in his own memoirs, Himmler told him on this occasion that the Nazis had already “liquidated about three million” Jews. (p.188)

Screenshot showing a photo of Haj Amin al-Husseini meeting
SS leader Heinrich Himmler,
with the dedication:
To His Eminence the Grand Mufti as a memory; 4 VII: 1943; H.Himmler.

This was obviously good news for al-Husseini. While the Nazis were initially content to solve their “Jewish problem” by driving Jews out of Germany and German-occupied areas, Rubin and Schwanitz argue that the importance they attached to their alliance with the Palestinian mufti was one of the factors that led to the adoption of the “Final Solution:” since al-Husseini wanted the Arab lands he intended to rule as “judenrein” as the Nazis wanted Germany and Europe, the Nazis had one more reason to conclude that it was in their interest to begin the systematic killing of Jews.

According to Rubin and Schwanitz, it was therefore also not entirely coincidental that shortly “after seeing the grand mufti Hitler ordered invitations sent for a conference to be held at a villa on Lake Wannsee. The meeting’s purpose was to plan the comprehensive extermination of all Europe’s Jews.” (p. 8) Al-Husseini was also “the first non-German informed about the plan, even before it was formally presented at the conference. Adolf Eichmann himself was assigned to this task. Eichmann briefed al-Husaini in the SS headquarters map room, using the presentation prepared for the conference. The grand mufti, Eichmann’s aide recalled, was very impressed, so taken with this blueprint for genocide that al-Husaini asked Eichmann to send an expert […] to Jerusalem to be his own personal adviser for setting up death camps and gas chambers once Germany won the war and he was in power.” (pp. 8-9)

The Nazis believed that, in contrast to some of the other Arab leaders who had shown interest in cooperating with them, the mufti had transnational appeal and influence due to his standing as a religious leader. The resulting esteem shown to al-Husseini by the Nazis was not only reflected in his access to the highest echelons of the Nazi leadership – including a lengthy audience with Hitler – but also in the lavish accommodations and payments he received:

“In November 1941, al-Husaini arrived in Berlin to a reception showing the Germans saw him as future leader of all Arabs and Muslims […] He was housed in the luxurious Castle Bellevue, once home to Germany’s crown prince and today the official residence of Germany’s president. Al-Husaini was paid for his personal and political needs an amount equivalent to about twelve million dollars a year in today’s values. The funds were raised by selling gold seized from Jews sent to concentration camps. Following this pattern, al-Husaini requested and received as his office an expropriated Jewish apartment. His staff was housed in a half-dozen other houses provided by the Germans. In addition, al-Husaini was given a suite in Berlin’s splendid Hotel Adlon and, for vacations, luxurious accommodations at the Hotel Zittau and Oybin Castle in Saxony.” (p.5)

So it is not at all “a strange thing for a Palestinian to go to a Nazi death camp” – particularly given the fact that al-Husseini remains a revered Palestinian leader. In recent years, Palestinian President Mahmoud Abbas has repeatedly paid homage to al-Husseini, which inevitably casts a shadow over today’s news that for the first time, Abbas issued a special statement for Israel’s Holocaust Remembrance Day describing the Holocaust as “the most heinous crime to have occurred against humanity in the modern era.”

This statement shouldn’t be dismissed lightly, since it will no doubt trigger furious reactions by all those who insist that the Palestinian “nakba” was a comparable tragedy. Nevertheless, those who will now rush to praise Abbas for this statement should pause for a moment and consider how much more could be achieved for the prospects of genuine reconciliation and peace if the Palestinians and the rest of the Arab world were finally willing to confront their own historical connections to the Nazi era. As Rubin and Schwanitz rightly highlight: “The regimes that would later rule Iraq for forty years, Syria for fifty years, and Egypt for sixty years were all established by groups and leaders who had been Nazi sympathizers.” (p.4) Given the re-emergence of Islamism, it is no less important to realize that this “ideology bore the mark of al-Husaini and the other wartime [Nazi] collaborators, especially the Muslim Brotherhood.”

Also posted at  The Algemeiner, my JPost blog,  and on the Polish blog Listy z naszego sadu

7 responses to “The Palestinians and the Holocaust”