David Sheen knows what it takes to demonize Israel [updated]

A few days ago, the media monitor CAMERA exposed one of the lies that budding anti-Israel activist David Sheen is spreading in order to make a living by demonizing Israel. As I have noted in a previous post, Sheen apparently hopes to appeal to the same audiences that enthusiastically embraced Max Blumenthal’s odious screed “Goliath,” which equated Israel with Nazi Germany and earned Blumenthal devoted fans wherever there are Jew-haters.

But even if one focuses relentlessly on Israel’s failings, it’s of course no easy job to pretend that the modern, pluralistic and democratic Jewish state is like Nazi Germany. While Sheen does his best to provide his audiences on social media and at activist gatherings on US campuses with the Israel-bashing they expect from him, he is also unwittingly demonstrating that it takes lots of lies to demonize Israel as a uniquely monstrous evil.

CAMERA caught Sheen when he claimed on Twitter that “Just as Nazis compared Jews to vermin to incite racism against them, Netanyahu compares non-Jewish Africans to ebola.” But even when his lie was exposed, Sheen continued to insist that Netanyahu “compared” African migrants to Ebola, because Netanyahu mentioned Israel’s “general efforts to defend our borders from illegal infiltrators and terror” in remarks addressing measures to prevent the spread of the disease. 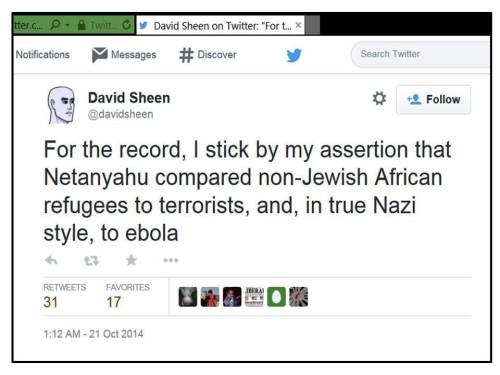 On Twitter, Sheen has often been challenged when he posted other lies and inaccuracies by Nurit Baytch, who has also published a detailed analysis of some of the fabrications Sheen has been presenting to activist gatherings in the US. Most recently, Nurit noted Sheen’s pathetic attempt to use a real estate advertisement that refers to Tel Aviv’s historic “White City” as yet another proof of Israel’s ingrained racism. 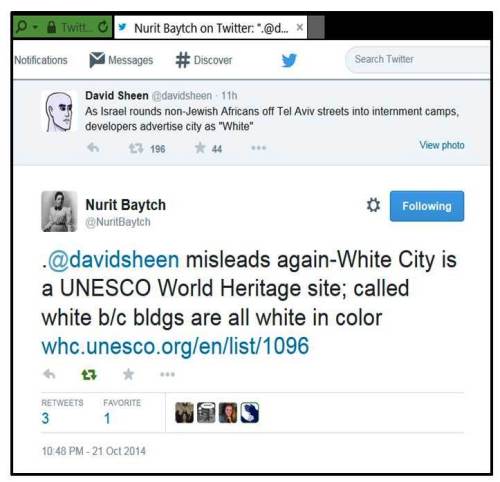 Of course, Sheen’s utterly ridiculous claim was eagerly retweeted by almost 200 of his followers – which apparently encouraged him to dig deeper and insinuate that calling white buildings white is somehow racist. Surely he will soon start a campaign to rename the White House… 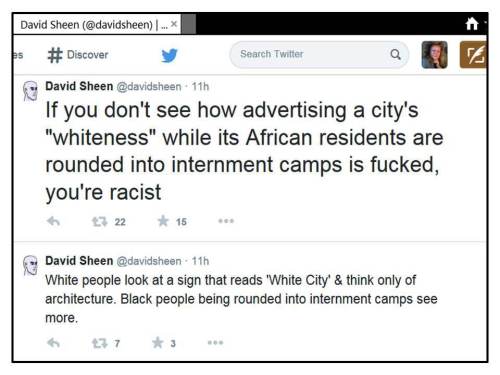 No less bizarre is Sheen’s apparent obsession with what he refers to as Israel’s “rape culture.” In recent days, I noticed two tweets where Sheen alludes to this supposed “rape culture” and provides links that are obviously meant to indicate there is a validation for his smears – but in both cases, the material he links to has nothing whatsoever to do with rape: one link leads to a report criticizing Ultra-Orthodox Jews for vandalizing ‘bat mitzvah’ ads in Jerusalem, while the other link, rather amusingly, leads to a report on the diametrically opposed world of fashion and “racy” advertisement.

But whether it’s about Ultra-Orthodox men insisting on an anachronistic “modesty” or young women repudiating any notions of “modesty” and confidently showing off their bodies, David Sheen can only fantasize about a “rape culture.”

Sheen’s bizarre tweet on the fashion article (which was retweeted by Max Blumenthal) is arguably particularly offensive, as reflected in this response:

I couldn’t find any other recent tweet that explains Sheen’s “rape culture” claims. While Sheen seems to accuse Israel in general of a “rampant rape culture” in one tweet, the other seems to suggest that this “rape culture” has something to do with the “army’s crimes” – presumably meaning that IDF soldiers rape Palestinians. Unfortunately for Sheen, he is going against the stream here: as deranged as it may sound, anti-Israel activists really prefer to point to the rarity of rapes by IDF soldiers as yet another proof that Israel is racist… As an award-winning Israeli research paper put it so preposterously: “In the Israeli-Palestinian conflict, it can be seen that the lack of military rape merely strengthens the ethnic boundaries and clarifies the inter-ethnic differences.”

While this illustrates nicely that truly anything can be used to bash Israel, Sheen usually focuses on the supposedly particularly dire plight of African migrants and refugees in Israel. Neither he nor his fans seem to be bothered by the fact that migrants and refugees face harsh experiences in countries around the world. If Sheen’s audiences in the US don’t follow the news (other than Electronic Intifada-style news from Israel), it would take only a quick search on Google to find plenty of harrowing reports on US detention centers and the merciless American “deportation machine” that even deports children – but of course, it is so much more thrilling to get worked up about problems in Israel, because when the world’s only Jewish state shows the same failings as the rest of the world, the Jew-hater happily concludes that Israel is too evil to be allowed to exist.

Together with his admired mentor Max Blumenthal, Sheen is currently in Berlin, where he and Blumenthal have faced some opposition to their efforts to demonize Israel (see here.) This evening, both Sheen and Blumenthal have boasted on Twitter about their shockingly thuggish attempts to harass and intimidate their critics. Blumenthal posted or re-tweeted several tweets by their fans that link to a clip featuring Sheen aggressively pursuing the leader of Germany’s Left (party) into the men’s room, screaming hysterically that his life will be in danger because Gysi called him an antisemite. Sheen posted this clip on YouTube with the title “Gysi, I’m asking you for an apology.”

But of course, Gysi has nothing to apologize, since he just called Sheen what he is – and Sheen proved once again what he is with his hysteric lies about having his reputation ruined and his life endangered because of Gysi’s entirely justified rejection of Sheen’s relentless demonization of Israel.