The not so progressive Palestinian cause

It seems that most people who support “pro-Palestinian” activism on campus would regard themselves as politically progressive. But there is arguably a lot about the “Palestinian cause” that is not at all progressive. The first problem is that most “pro-Palestinian” activism could be more appropriately described as anti-Israel activism that all too often denounces the world’s only Jewish state in terms that echo the Nazi slogan “The Jews are our misfortune.” Moreover, progressives who champion the “Palestinian cause” are apparently either indifferent to or ignorant of the well-documented reactionary and extremist views that are mainstream among Palestinians in the West Bank and Gaza.

Take for example the coverage of last summer’s war: while the media resolutely focused on the suffering and devastation in Gaza, Palestinians overwhelmingly felt victorious and credited Hamas for this supposed “victory.” In the immediate aftermath of the war, a whopping 79% of Palestinian saw Hamas as the winner, and even though none of Hamas’ demands were met, 59% believed that the war’s “achievements” justified “the human and material losses sustained by the Gaza Strip.” At the same time, 80% supported “the launching of rockets from the Gaza Strip at Israel” – supposedly as a means to end “the siege and blockade,” i.e. the restrictions imposed only because of the launching of rockets and terror attacks from Gaza. Perhaps most shockingly, a clear majority of 57% endorsed “launching rockets from populated areas in the Gaza Strip,” thereby accepting that Gaza residents would be endangered in Israeli strikes against the rocket launchers.

To be sure, these numbers soon changed to reflect somewhat diminished enthusiasm, and the survey results showed interesting differences between Gaza and the West Bank. Nevertheless, Hamas, which had used Gaza’s civilian neighborhoods to launch its rockets and had spent enormous resources to build a sophisticated tunnel network that made war all but inevitable, would have handily won Palestinian elections in the aftermath of a war that brought so much death and destruction to Gaza. Indeed, when Hamas won student council elections in the West Bank this spring, many argued that this result reflected broader political trends, and a Hamas official promptly concluded that this was a victory won by “the Al-Qassam Brigades’ rockets.”

Far from criticizing this militaristic and nationalistic fervor, leading anti-Israel activists like Ali Abunimah and Max Blumenthal tend to echo and justify it. Abunimah has even gone so far as to object to criticism of summary public executions of accused collaborators by Hamas during the war. Similarly, the fascist genocidal Hamas charter that envisages a society dedicated to “jihad” and the religiously sanctioned killing of all Jews is usually politely ignored by activists.

Indeed, by now it is widely considered as distasteful and ‘right-wing’ to take note of the well-documented daily incitement in Palestinian media and public life. A related New York Times article openly acknowledged a few years ago that the paper of record preferred to ignore this subject. However, the deplorable results of this incitement are reflected in surveys of Muslim opinion conducted by the respected Pew Research Center.

In the aftermath of the 9/11 attacks, Pew monitored Muslim public opinion about Al Qaeda and Osama bin Laden for a decade, and the survey results document that throughout this decade, Palestinians remained bin Laden’s most ardent admirers. 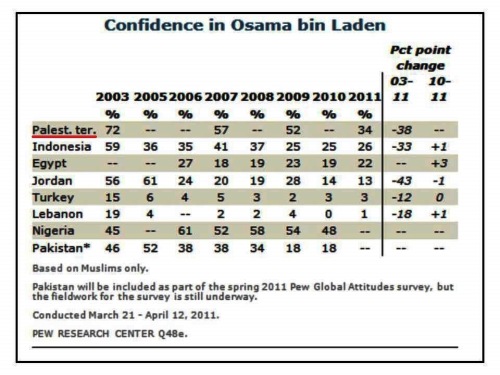 These results are arguably all the more shocking in view of the fact that survey participants were asked if they had “confidence” in bin Laden “to do the right thing in world affairs.” In 2003, bin Laden actually inspired more “confidence” in Palestinians than their iconic strongman Yassir Arafat.

As Palestinian enthusiasm for the al-Qaeda leader indicates, support for terrorism among Palestinians is widespread even if the target is not Israel. Among the Muslim populations surveyed by Pew, Palestinians have long been the strongest supporters of suicide bombings targeting civilians “in order to defend Islam from its enemies.” 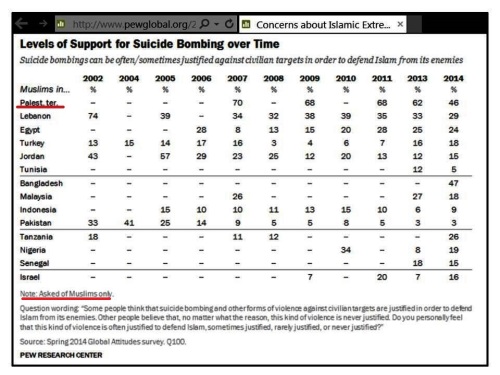 While the latest Pew results show a fairly dramatic decline in Palestinian support for suicide bombings against civilians between 2013 and 2014, al-Qaeda still received the highest “favorable” rating among Palestinians, though Pew noted that “[Palestinian] support is down nine percentage points since 2013.” 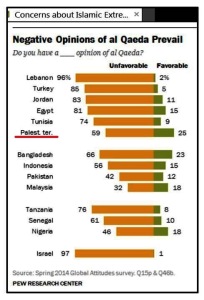 So by now, “only” one out of every four Palestinians has a “favorable” view of al-Qaeda.

It is noteworthy that the last two charts illustrate a marked difference between the views of Israel’s Muslims and the Muslims in Gaza and the West Bank, even though Palestinians usually insist that all Israeli Arabs are Palestinians.

Given the proclivity for extremism in the Palestinian territories, it is hardly surprising that most Palestinians insist that “the rights and needs of the Palestinian people cannot be taken care of as long as the state of Israel exists.” However, this is of course a view that is widely shared in the Muslim Middle East.

Since the “rights and needs of the Palestinian people” are usually understood to include a state of their own, it is remarkable how rarely it is debated what kind of state Palestinians envisage. Perhaps the first noteworthy point of the Palestinian draft constitution is that it arguably undermines Palestinian claims of a distinct identity: Article 2 defines Palestine as “part of the Arab homeland” and identifies the “Palestinian people” as “part of the Arab and Islamic nations.” Article 7 stipulates that the “principles of the Islamic shari’a are a main source for legislation,” while the “followers of the monotheistic religions” are merely granted the right to “have their personal status and religious affairs organized according to their shari’as and religious denominations within the framework of [positive] law, while preserving the unity and independence of the Palestinian people.”

The overwhelming majority of Palestinians are Muslims; according to current estimates, Christians comprise only 1-2% of the Arab population in the West Bank and the Gaza Strip. As documented in a Pew survey from 2013 that included almost 40 000 Muslims in 39 countries, Palestinians in Gaza and the West Bank were often among the Muslim populations with the most extremist views about the role of Islam in society: 89% of Palestinians want Sharia law; 66% endorse the death penalty for Muslims who convert to another religion; 76% support mutilation as a punishment for theft, and a shocking 84% want adulterers stoned to death.

“Justice” may be one of the central slogans of the supposedly progressive BDS movement, but in view of the medieval sharia “justice” Palestinians want, it is apparently a demand focused strictly on Israel. “Equality” is another goal BDS professes to pursue, but again, there is probably a highly selective interpretation, because Palestinians are definitely not keen on equality for women, let alone for gays. Like the vast majority of Muslim populations everywhere, 89% of Palestinian Muslims regard homosexuality as morally wrong; only 1% is prepared to see it as morally acceptable. When it comes to so-called “honor killings”, less than half (about 45%) of Palestinian Muslims reject these murders as never justified. And like in most Muslim societies, the vast majority of Palestinians – 87% – insists that a wife must always obey her husband. Only 33% of Palestinian Muslims believe a wife should have the right to divorce her husband, and only 43% think that sons and daughters should have equal inheritance rights. Finally, the other main BDS slogan – freedom – also seems to be a demand that isn’t necessarily meant to apply to the state Palestinians supposedly want:  when asked if they prefer democracy or a strong leader, just 55% of Palestinian Muslims chose democracy, while 40 % preferred a strong leader;  when asked how much political influence religious leaders should have, 29% wanted religious leaders to have a lot of political influence, and another 43% wanted religious leaders to have at least some political influence.

In view of this strong support for political influence by religious leaders – and in view of the BDS goal to see Israel replaced by a Palestinian Muslim majority state – it is arguably important to be aware of the kind of political influence exerted by Palestinian religious leaders in recent years. Unfortunately, Palestinian religious leaders have a long record of denying the historic Jewish ties to Jerusalem; this includes of course the denial of the existence of the Temple.  In a recently published Reuters report, the Grand Mufti of Jerusalem insisted that the Temple Mount in its entirety should be considered as the Al Aqsa (mosque) compound and that “Jewish prayer at Al-Aqsa [i.e. anywhere on the Temple Mount, which is Judaism’s holiest place] is not so much an insult as it is an aggression.” The same Grand Mufti can be seen in this video clip from 2012, where he is announced as a speaker whose words “are necessary because [of] our war with the descendants of apes and pigs” (i.e. Jews); the Grand Mufti obliges by reciting the notorious Islamic sanctioning of the killing of all Jews that is also cited in the Hamas charter. 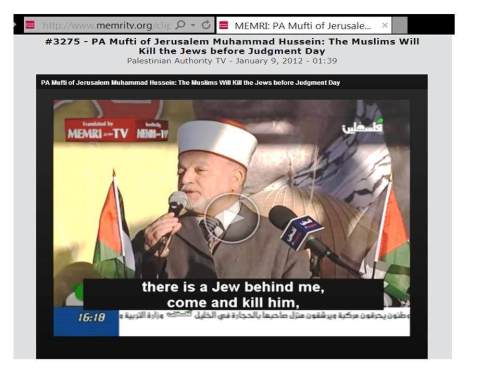 Another very recent incident involved Sheikh Khaled al-Mughrabi, a religious teacher who used one of his regular classes at the Al Aqsa mosque to teach his students every antisemitic calumny he could possibly think of, including the blood libel – which he presented as a justification for the Holocaust – as well as claims like “Jews worship Satan, plotted the 9/11 attacks, and control the Freemasons who sacrifice their wives and children in secret ceremonies.” After the Simon Wiesenthal Center sent a protest letter to Jordan’s King Abdullah and Palestinian Authority President Mahmoud Abbas, the Sheikh doubled down and defended his antisemitic tirade in his next class. Perhaps not entirely coincidentally, he also echoed the among anti-Israel activists popular complaint that their “criticism” of Israel and Zionism is unfairly condemned as antisemitism: “If you give advice to a Jew, he immediately says: ‘You’re inciting to racism, you’re an Antisemite.’ Immediately. It has become a cliché for them, a permanent sentence,[…] which they stick on every person who gives them advice.”

Only bigots would deny that al-Mughrabi’s rant was antisemitic, but all he really did was talking about Jews in the same way anti-Israel activists talk about the Jewish state: just as al-Mughrabi associated Jews with every evil he could think of, anti-Israel activists consistently associate Israel with every evil they can think of. As far as anti-Israel activists are concerned, there’s very little you cannot say as long as you substitute “Zionists” for Jews. Inevitably, the goal of demonizing the world’s only Jewish state as an evil that must be opposed and eliminated requires a simplistic black-and-white narrative that features the Palestinians only as victims who deserve uncritical support in their heroic struggle against the evil forces of Zionism.

First published on my JPost blog.

This entry was posted in JPost and tagged antisemitism, BDS, Islamism, Palestinian, terrorism. Bookmark the permalink.

6 responses to “The not so progressive Palestinian cause”