Ever since Ayaan Hirsi Ali’s latest book “Heretic: Why Islam Needs a Reformation Now” came out at the end of March, the writer who should be celebrated as a “hero for our time” has been maligned in numerous articles. It was arguably no surprise that Israel-haters like Max Blumenthal would try to denigrate Hirsi Ali, but it was pathetic to see that supposedly serious media professionals like Al Jazeera presenter Mehdi Hasan promoted Blumenthal’s smear campaign on Twitter. 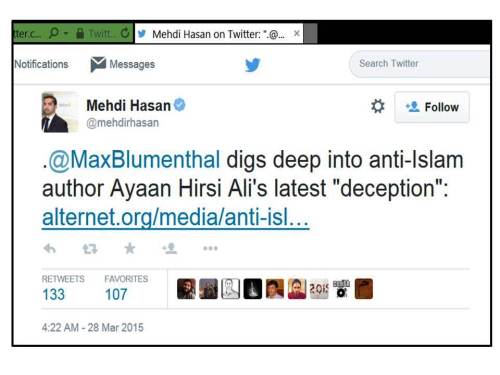 The latest attack against Hirsi Ali describes her as “dangerous” and sets out to explain why “we must reject her hateful worldview.” The sub-header hints already at the major reason: endorsing Hirsi Ali “insults and mocks a billion Muslims” – and as we know from many incidents, that can indeed be very “dangerous”… But of course, nobody knows that better than Ayaan Hirsi Ali herself.

What is particularly noteworthy about this attack against Hirsi Ali is that it is authored by a very successful self-described “Muslim” woman whose own life-story and life-style is quite unthinkable in any Muslim country. Indeed, in an interview Rula Jebreal gave to an Italian blog in 2009, she described herself as “married to Western values ​​of freedom and democracy, secularism and tolerance.”

Jebreal claims now that it is her “own, very different experience of Islam” that “compels” her “to challenge Hirsi Ali’s work.” She accuses Hirsi Ali of conflating Wahhabism with Islam and asserts that her own experience shows the “inherent pluralism” and “diversity” within Islam:

“As a Muslim woman married to a Jew and the mother of a Catholic daughter, I have lived in Jerusalem, Cairo, Rome and New York, and I am a regular visitor to other Muslim countries. What I have seen, particularly after the 9/11 attacks, was a broad rejection, not only of the extremism of Al-Qaeda but also of the authoritarian violence of Western-backed secular dictators — who, by stripping Muslims of their constitutional rights, jailing and torturing them, accomplished only the mass radicalization of young Muslims.

My father, a guard at al-Aqsa mosque in Jerusalem, believed, like most of the world’s one billion Muslims, that Sharia is not fixed and monolithic, but always in flux, its core principles — such as preserving life, faith, intelligence, family and property — remaining sacrosanct, but requiring translation into more flexible rules to match our lives in a changing world.

He believed that context and interpretation matter when reading the Quran and the Hadiths, and that interpretations had changed along with centuries of social change. Context mattered since the early days of Islam. We always, for more than a millennium, understood text in context. We have 1,400 years of inherent pluralism within Islam to testify to that diversity within our religion.”

Apparently, Jebreal has never asked herself in how many Muslim countries she could live with her Jewish husband (Arthur Altschul Jr.) and her Catholic daughter if both wanted to freely and safely practice their religion. She has also apparently never wondered if her personal experiences and her impressions from her “regular” visits to Muslim countries provide a sound basis for general conclusions about Muslims views.

So according to her, “after the 9/11 attacks, [there] was a broad rejection … of the extremism of Al-Qaeda.” That fairly vague statement could perhaps pass as not entirely untrue, but the regular surveys by the respected Pew Research Center show a much more problematic reality than Jebreal would like to acknowledge: for years after 9/11, there was actually considerable admiration for bin Laden, particularly among Palestinians and in Jordan as well as in supposedly “moderate” Indonesia; likewise, Nigerian Muslims also were ardent bin Laden fans.

Pew surveys tracking Muslim support for “suicide bombing and other acts of violence that target civilians” also show that actually many millions of Muslims remain willing to endorse such acts “in defense of Islam.”

Moreover, all Pew surveys show that, among Muslim populations, Palestinians hold very extreme views on many issues. This is not only true when it comes to support for terrorism, but also when it comes to Sharia punishments. Jebreal, who often highlights her Palestinian identity, has a daughter who was born out-of-wedlock, and more than one-third of her fellow-Palestinians would have considered it justified if her family had killed her for this “stain” on their “honor.”

In most Muslim-majority countries, there is massive popular support for having Sharia as the country’s official law; and contrary to the benign views Jebreal attributes to her father, clear majorities of Sharia supporters in North Africa, the Middle East and South Asia, want to see criminals mutilated and those who leave Islam executed. In addition, huge majorities of Muslims condemn homosexuality and sex outside of marriage as immoral, and among many Muslim populations, clear majorities want to see adultery punished by stoning.

Similarly, Jebreal claims that “most of the world’s one billion Muslims [believe] that Sharia is not fixed and monolithic, but always in flux.” As a matter of documented fact, however, overwhelming majorities of Muslims believe Sharia is “the revealed word of God,” and particularly observant Muslims who pray several times a day tend to insist that there can be only a single interpretation of Sharia.

Jebreal may have her own, personal “experience of Islam,” but it is clearly not representative of well-documented mainstream Muslim views, which are – certainly in the context of the 21st century – often reactionary, fundamentalist and extremist. But since Jebreal states that it is her own “experience of Islam” that “compels” her “to challenge Hirsi Ali’s work,” her apparent ignorance of prevalent Muslim attitudes and views reduces this purported “challenge” to just another pathetic attempt to malign Hirsi Ali and discredit her entirely justified arguments about the urgency of a reformation of Islam.

First published at my JPost blog in May.

This entry was posted in JPost and tagged Ayaan Hirsi Ali, Islam. Bookmark the permalink.

One response to “The vicious campaign against Ayaan Hirsi Ali”