The bloody hypocrisy of Vegans against the Occupation

[Note: This is an updated version of a previously published post]

When I first heard about “Vegans against the occupation,” I thought for a moment that this was surely a group opposing the Chinese occupation of Tibet. After all, even though Tibet’s climate makes it difficult to be a vegetarian or vegan, Buddhism has traditionally been very sensitive about the suffering of animals and is often associated with promoting vegetarian or even vegan diets.

But of course I was wrong: “Vegans against the occupation” is just another group with an intense hatred for Israel – so intense, in fact, that one of the leading members of this small group has been devoting a lot of energy to promoting the Tamimis of Nabi Saleh, who obviously couldn’t care less about veganism.

[Warning: disturbing screenshot below, showing a teenaged Tamimi family member posing mockingly with the severed head of a goat or sheep slaughtered for Eid al Adha, the Muslim Festival of Sacrifice] 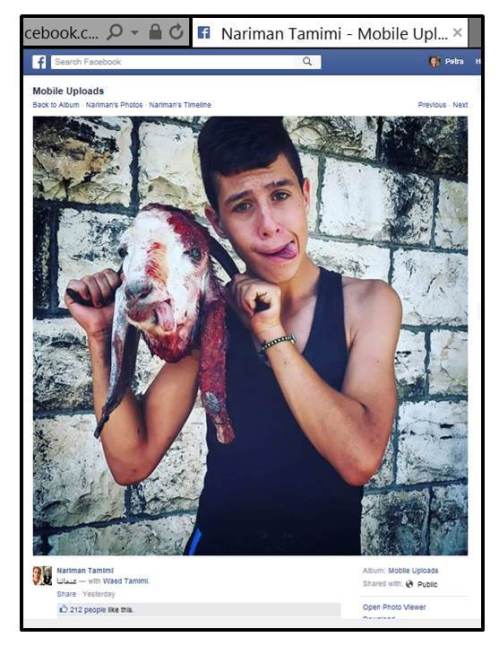 But Ariel Gold, aka Ariel Gold-Vegan of Ithaca, New York, hates Israel more than she hates this kind of revolting “fun”. While “Vegans against the occupation” is a tiny group that doesn’t warrant much attention, it provides an excellent example of the bottomless hypocrisy that is the hallmark of anti-Israel activism.

According to her Facebook (FB) page (publicly accessible at the time of this writing), Gold’s profession – or maybe more accurately, her all-consuming occupation – is “delegitimizing zionism.” [Note: this has now been changed to show that Gold works for CODEPINK, a group that likes to mingle with Jew-haters]

In recent weeks, Gold has been pre-occupied with promoting Bassem Tamimi, whose current month-long speaking tour in the US has apparently been organized by Gold. Just like the Tamimis, Gold also finds it useful to exploit her children for her activism, as she did most recently when she sent her 12-year-old daughter to accompany Bassem Tamimi to teach third-graders in a school in Ithaca about “the suffering of Palestinian children at the hands of Israel.”

Well, at least Palestinian kids sometimes have a bit of fun with dead goats, and sometimes they also have the chance to enjoy themselves while watching adults torture and slaughter cattle. Just in case kids get the idea that abusing animals is OK, Hamas once even devoted an episode of a notorious kids’ program to showcasing “the worst way … to teach kids to be kind to animals.”

Among animal rights activists, Palestinians have something of an international reputation for being particularly cruel to animals. But while her friends were getting ready to slaughter animals and pose with their remains, Ariel Gold was busy baking “Vegan Anti-Zionist Sweet Potato Challah” and bragging about how she raised her “vegan” children “to recognize zionism as a racist ideology rooted in ethnic cleansing.” Even her son’s bar mitzvah was all about Gold’s anti-Israel activism.

She concluded her little story about the successful indoctrination of her children and the “Vegan Anti-Zionist Sweet Potato Challah” with the bolded declaration:

“Being Progressive except #Palestine is like being #Vegan except bacon.”

And it’s probably like real vegan bacon to hate Israel intensely while idolizing people who can get more than 200 FB “Likes” for a photo of a teenaged relative posing mockingly with the severed head of a slaughtered animal.

I did quite a bit of research on the Tamimis for several articles I wrote in the wake of the recent viral video that showed the futile attempt of an Israeli soldier to arrest the 12-year-old Mohammad Tamimi for stone throwing. First I noticed that some of their publicly accessible FB posts include statements and material that is hard to square with their otherwise carefully cultivated image as “non-violent” activists and “human rights defenders.” There are, for example, FB “likes” from Bassem Tamimi for pages and comments promoting the Hamas-affiliated jihadist Al-Qassam Brigades. Moreover, while the Tamimis have always refused to condemn terrorism, I was taken aback to see that Bassem Tamimi’s wife Nariman openly shared a popular FB post that objected to the description of the perpetrators of several murderous terror attacks as “terrorists” and insisted they should be hailed as “rebels.” Perhaps unsurprisingly, one of these murderous “rebels” is Tamimi family member Ahlam Tamimi, the mastermind of the 2001 Sbarro pizzeria massacre in Jerusalem.

As I have noted elsewhere, I have therefore increasingly come to understand that when the Tamimis invoke their “right to resist,” they also mean the “right” to commit mass murder. This is particularly obvious in statements reported by an Israeli news site and highlighted in a recent post at the blog of Frimet and Arnold Roth, who lost a daughter in the bloodbath of which Ahlam Tamimi and her admirers are so very proud. As the Roth’s translation of the Hebrew original shows, Nariman Tamimi – the mother of the child stars of the recent viral video – declared in no uncertain terms:

“What she [Ahlam Tamimi] did was an integral part of the struggle. Everyone fights in the manner in which he believes. There is armed uprising, and there is popular uprising. I support every form of uprising.”

Chances are that Ariel Gold (-Vegan) will be more disturbed by the tasteless image Nariman Tamimi shared on FB than by her open display of support for an unrepentant murderer who was only too delighted to find out that her victims included eight children.

In the wake of the recent terror attack in Jerusalem that claimed the lives of two men and left one woman seriously injured and one toddler lightly injured, Bassem Tamimi’s wife Nariman posted a cartoon glorifying the lethal stabbing on her FB page. The cartoon misleadingly suggests that the terrorist was targeting a soldier, whereas in reality he was targeting a couple with two children returning from prayers at the Western Wall.

Nariman Tamimi shared this cartoon from a Palestinian news site, where it was “liked” by almost 14,000 people and shared by almost 1,700. 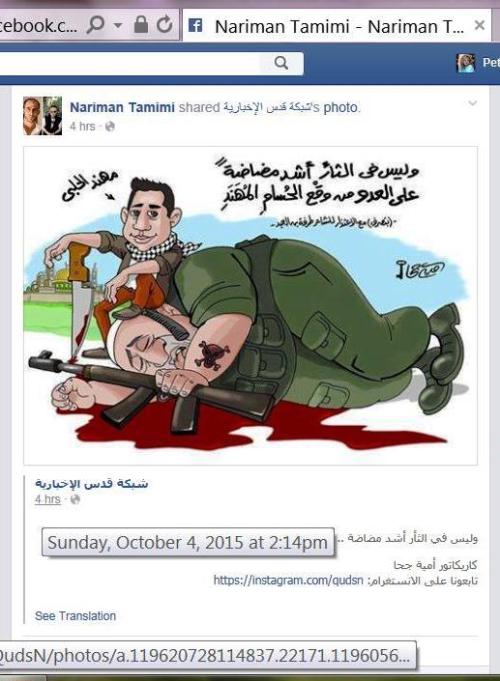 In addition to this cartoon, Nariman Tamimi and other members of her family posted countless other endorsements of terrorism on social media. I have documented a few examples in a previous post and will add more material. Most notable, however, is the Tamimis’ ongoing promotion of the vile ideology of Sbarro massacre mastermind Ahlam Tamimi, which I have documented in a recent guest post at Elder of Ziyon’s blog.

While there is clear evidence indicating that the FB page revealed in this post is indeed Ahlam Tamimi’s page, it is obvious that even if it is maintained by someone else, the page promotes her vicious views – and Bassem Tamimi as well as his wife and daughter are FB “friends” with this person.

Below a screenshot from Bassem Tamimi’s FB page, taken recently when he had just shared one of Ariel Gold’s many posts promoting him (and shamelessly using her daughter for this purpose), with the sidebar icon showing his FB “friends” including the “Princess of the Free” Ahlam Tamimi, whose FB profile and cover picture show the man who detonated the bomb at the crowded Sbarro restaurant in Jerusalem in August 2001. 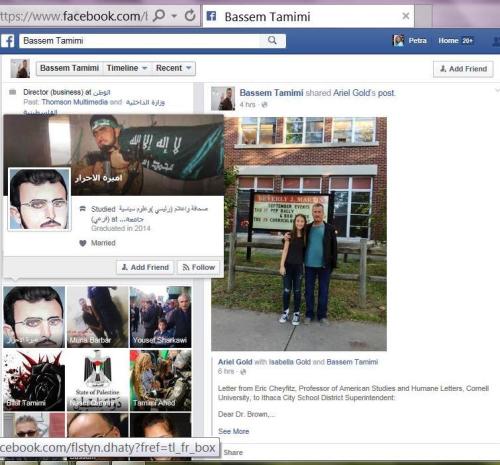 That is the company Ariel Gold (-Vegan) wants for her own children, and these are the people Gold wants third-graders in her town Ithaca (NY) to admire.

This entry was posted in Uncategorized and tagged Israel, Tamimi, terrorism. Bookmark the permalink.

2 responses to “The bloody hypocrisy of Vegans against the Occupation”