For several years, I have documented how Palestinians exploit Christmas as yet another occasion to deny the historic Jewish connection to the ancient Land of Israel and to present Israel as illegitimate and evil. The installment of this past Christmas is cross-posted below from my Times of Israel (TOI) blog; Legal Insurrection has a much more comprehensive post aptly titled “Guide to How Anti-Israel Activists Hijack Christmas.”

But in the meantime, there was also a noteworthy New Year’s greeting of sorts posted on January 1st by Radio Bethlehem on their Facebook page, where the post has garnered more than 1400 “Likes”. The page is very popular and has been “liked” by more than 2,3 million people; I scrolled through several dozens of posts and saw that, while there are some viral posts “liked” by thousands, most posts get several hundred “Likes” – so this one was fairly popular. 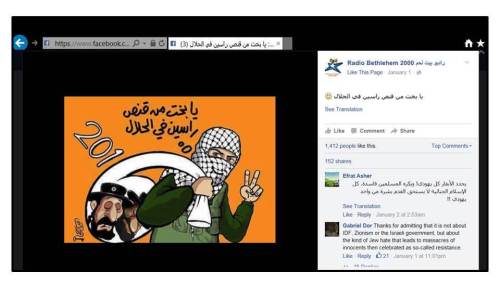 A Palestinian Christmas tree for terrorists

Based on the stories associated with the annunciation of the birth of Jesus to the shepherds, Christians everywhere view Christmas as the season of peace and goodwill to all. Unfortunately, in the environs of what the Gospel of Luke describes as “the town of David” – i.e. Bethlehem, the birthplace of Jesus – Palestinians have long been trying to establish a very different tradition. This Palestinian Christmas tradition exploits Christianity’s most popular holiday as yet another occasion to deny the historic Jewish connection to the land where Jesus was born and to fan the flames of hatred against Israel.

Two years ago, the Palestinian Liberation Organization (PLO) produced a YouTube clip showing Santa’s trip to Bethlehem threatened by various symbols of the occupation; the short text posted with the clip explained that on Christmas, “Palestine celebrates the birth of one of its own, Jesus Christ.”

One year ago, there was apparently no official attempt to claim Jesus as a symbol of Palestinian nationalism, and the Christmas clip posted by the PLO focused on contrasting how wonderful it would be for tourists to be able to visit Bethlehem in the State of Palestine as opposed to having to pass countless security checks on their way to occupied Bethlehem.  However, for those familiar with Palestinian demands, the clip’s title “All I Want For Christmas Is Justice” hinted at much more than the desire to have an independent state, since “justice” as understood by Palestinians includes the imaginary “right of return” of Palestinian refugees and millions of their descendants to Israel.

While I haven’t seen any official Palestinian message for this Christmas, I noticed in early December that “pro-Palestinian” activists on Twitter were eagerly sharing a picture showing a “#Xmas tree in o’#Jerusalem decorated with pictures of 108 martyrs killed by the Israeli occupation since 1 Oct 2015.” 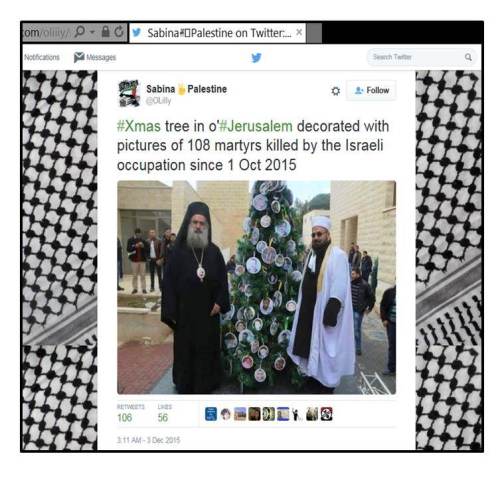 I was first not entirely sure if the claim that the tree was decorated with pictures of “martyrs” – which usually means terrorists killed during an attack – was correct. After all, it is obviously quite an outrageous idea to decorate a Christmas tree with pictures of terrorists – a bit like decorating a table for the nightly Ramadan meal with a pig’s head. However, Israeli journalist Gal Berger also tweeted a picture of the tree, noting that it was a Christmas tree at Al Quds University in Abu Dis and confirming that it was indeed decorated with pictures of terrorists.

In the meantime, the Hamas mouthpiece MEMO also reported on this incident under the title “‘Martyrs’ Christmas tree at Al-Quds University angers Israelis.” According to this report, the Christmas tree was “decorated with photos of ‘martyrs’ killed by Israeli settlers and security forces” and it “was unveiled on the Abu Dis campus in a ceremony attended by the university’s President, Imad Abu Kishk, Greek Orthodox Archbishop Atallah Hanna and the Mufti of Bethlehem, Sheikh Abdul Majid Amarna.”

The event was reportedly “praised and welcomed widely by Palestinian students” and was seen as a demonstration of “the unity and cohesion between Christians and Muslims at the university.” This inspired Quds Open University in Jenin “to follow suit by putting up its own ‘martyrs Christmas tree’.”

Of course, Christmas is pretty much the only time of year when Palestinian Christians in the West Bank can hope for positive attention and praise if they are willing to demonstrate “unity and cohesion between Christians and Muslims.”

But Palestinians envision their future state as designating Islam as “the official religion in Palestine,” and the “principles of the Islamic shari`a” are supposed to be “a main source for legislation.” Indeed, a poll published last year shows that a shocking 24% of Palestinians view the savagely brutal terror group ISIS positively.

However, it is of course Israel that is usually blamed for the difficult situation of Palestinian Christians. But as Michael Oren once pointed out in a related article, Bethlehem provides a good example of what is really going on:

“The church in Bethlehem had survived more than 1,000 years, through wars and conquests, but its future now seemed in jeopardy. Spray-painted all over its ancient stone walls were the Arabic letters for Hamas. The year was 1994 and the city was about to pass from Israeli to Palestinian control. I was meeting with the church’s clergy as an Israeli government adviser on inter-religious affairs. They were despondent but too frightened to file a complaint. The same Hamas thugs who had desecrated their sanctuary were liable to take their lives.”

According to Oren, Bethlehem’s Christian population grew by 57% under Israeli rule. But since the Palestinian Authority took over in 1995, “those numbers have plummeted. Palestinian gunmen seized Christian homes—compelling Israel to build a protective barrier between them and Jewish neighborhoods—and then occupied the Church of the Nativity, looting it and using it as a latrine. Today, Christians comprise a mere one-fifth of their holy city’s population.”

For sure, a Christian like Father Gabriel Naddaf who openly dares to criticize Abbas for the preposterous claim that Jesus was a Palestinian wouldn’t fare very well under Palestinian rule. Perhaps not all Christians in the West Bank feel comfortable with a Christmas tree celebrating those who tried to kill Israeli Jews, but speaking out against it would obviously be very risky.

This entry was posted in TOI and tagged antisemitism, Israel, Palestinian, terrorism. Bookmark the permalink.