Since I wrote about Rania Khalek and her “updates on Jewish evil” almost a year ago (belatedly cross-posted below because it is relevant to this new installment), her career as an anti-Israel activist has taken off: she is now an “associate editor” at Ali Abunimah’s Electronic Intifada and writes regular posts for the site. Her most recent contributions include a piece entitled “Ta-Nehisi Coates sings of Zionism,” where she attacks the award-winning American writer for what she deems “one of his most glaring political lapses.” What bothers Khalek so much is that, in order to make the case that American Blacks should receive reparations for slavery and discrimination, “Coates presents German reparations to Israel as a successful and moral model, ignoring the horrors Israel inflicted and still inflicts on Palestinians and other people of the region using those funds.”

Before looking at Khalek’s new outburst of blatant bigotry, it is worthwhile noting that the title of her piece echoes a 2008 post by Ta-Nehisi Coates – “The Negro Sings Of Zionism” – where he described the “need for Barack Obama to assure us that he is, indeed, the best friend Israel could ever have” as “distasteful.” For whatever reason, anti-Israel activists discovered some six years later that they should take Coates to task for “[i]nvoking Malcolm X to justify Zionism” in this piece, and Coates duly apologized: “Yes it is [sad]. Penned as though the Palestinian people do not exist. Deeply wrong.” He added: “Apologies for pontificating on an actual struggle, as though it were a pet science project.”

Khalek is also picking up a story from 2014, when Ta-Nehisi Coates first made his by now famous “Case for Reparations” in the Atlantic. It is perhaps noteworthy that this piece opens with a quote from Deuteronomy 15: 12–15:

“And if thy brother, a Hebrew man, or a Hebrew woman, be sold unto thee, and serve thee six years; then in the seventh year thou shalt let him go free from thee. And when thou sendest him out free from thee, thou shalt not let him go away empty: thou shalt furnish him liberally out of thy flock, and out of thy floor, and out of thy winepress: of that wherewith the LORD thy God hath blessed thee thou shalt give unto him. And thou shalt remember that thou wast a bondman in the land of Egypt, and the LORD thy God redeemed thee: therefore I command thee this thing today.”

Perhaps prompted by the major awards Coates has received in the past two years, Rania Khalek apparently felt that it was finally time to air the longstanding resentment she seems to have nurtured ever since Coates and his Atlantic colleague Jeffrey Goldberg didn’t allow her to derail the discussion at an event she attended in 2014. She has opined on Twitter that “[i]t’s unfortunate that @tanehisicoates offers legitimacy to war crimes enthusiast & apartheid lover @JeffreyGoldberg” and has wondered how anyone can “take Coates seriously as an anti-racist while he allies w a former Kahanist Israeli prison guard who cheered the Iraq war.”

Luckily, Khalek now has the Electronic Intifada to showcase her bigotry. As far as she is concerned, Coates is guilty of “lauding Germany’s bankrolling of a racist, settler-colonial state as a model;” furthermore, Khalek feels that Coates “ignores the Nakba, erases Palestinian suffering and gives Germany a free pass for making Palestinians into secondary victims of its European genocide.”

Unsurprisingly, Khalek also claims that the “narrative” Coates advances “completely ignores the fact that while other Jews were resisting the Nazis, Zionists infamously made a deal with them, the notorious Transfer Agreement of 1933, to facilitate the transport of German Jews and their property to Palestine and which, as Joseph Massad points out, broke the international Jewish boycott of Nazi Germany started by American Jews.”

Yes, you read this correctly: Khalek is saying here that the evil Zionists should be condemned for trying to help Jews flee Nazi Germany instead of leaving them to their fate. In order to make her bigoted case, she linked to two Al Jazeera op-eds by notorious Columbia University professor Joseph Massad, who is listed as an Electronic Intifada contributor and whose writings on Israel are sometimes hard to distinguish from material posted on neo-Nazi sites like Stormfront. When Al Jazeera published one of the Massad articles Khalek links to back in 2013, Jeffrey Goldberg tweeted sarcastically: “Congratulations, al Jazeera: You’ve just posted one of the most anti-Jewish screeds in recent memory.”

Some of the reactions to Khalek’s piece are documented in this Israellycool post; it is particularly noteworthy that Ali Abunimah responded to criticism of Khalek’s piece by accusing critics of “defending Zionist-Nazi collaboration.” As Avi Mayer rightly pointed out, what Abunimah denounces as “collaboration” saved the lives of some 60,000 German Jews, and it is definitely hard to avoid the conclusion that Abunimah “would have preferred they be left to die.”

For more on the vile fantasies about “Zionist-Nazi collaboration” that are so popular among anti-Israel activists, see the following post that was originally published at my JPost blog in April 2015. But while this post focuses on Rania Khalek, it is important to note that Ali Abunimah fully supports her bigotry and that he is an ardent admirer of Massad, who uses his academic position to legitimate material that is promoted on neo-Nazi sites.

You may have never heard of Rania Khalek – a Lebanese-American “journalist” who thinks “objectivity is bullshit” and is apparently prone to anxiously counting how many Jews write about her favorite topics – but she is quite popular among anti-Israel activists. While Khalek is in no way original and keeps busy with simply amplifying the themes propagated by sites like Ali Abunimah’s Electronic Intifada, she recently managed to provide a truly excellent example of the pervasive antisemitism that is a quasi-professional hazard for activists dedicated to demonizing the world’s only Jewish state as a monstrous evil that must be denounced in terms eerily reminiscent of the anti-Jewish bigotry of bygone times.

In an effort to promote the among anti-Israel activists popular claim that there was some sinister “Zionist collaboration with Nazi Germany,” Khalek recently posted a tweet linking to a clip of Max Blumenthal regaling an audience in Stuttgart, Germany, with his tall tales on this subject. As Nurit Baytch, who documented the resulting developments, put it so pithily, Khalek then tried “to link Zionism to anti-Semitism by linking to Holocaust denial site VHO.org, inadvertently laying bare the much more pervasive links between anti-Zionism and anti-Semitism.”

Khalek was apparently not much bothered that Nurit Baytch had caught her linking to a Holocaust denial site, but she did react when BuzzFeed’s Tom Gara took notice on Twitter. 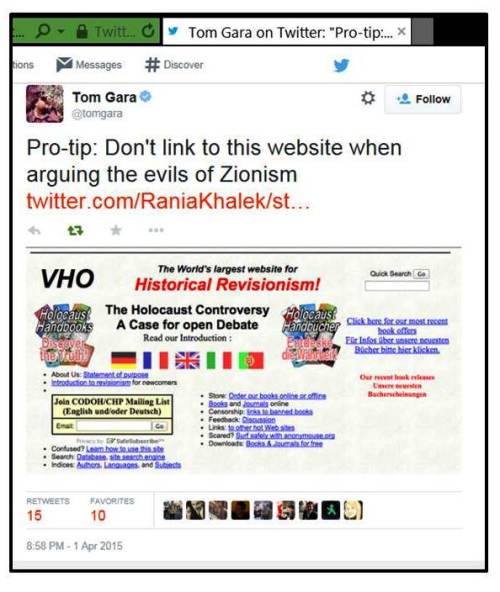 Khalek deleted her tweet and responded to Gara that it had just been “an error,” insisting at the same time that the book she had recommended from the site was “completely factual.” In other words, Khalek is convinced that a site devoted to minimizing Nazi crimes and defending people “not believing in the existence of gas chambers” can be trusted to feature a “completely factual” book that presents Zionist Jews as Nazi collaborators – which is obviously an idea that deserves as much ridicule and contempt as the notion that a white supremacist site would be a good place to look for a “completely factual” book on blacks.

Of course, as I have noted in a previous post dealing with the same sordid subject, those truly interested in the alleged “collaboration” between Zionists and Nazi Germany could consult a serious scholarly study on this topic – though admittedly, Professor Nicosia’s book wouldn’t satisfy anti-Israel activists like Khalek, since Nicosia warns already in his introduction [pdf] that readers eager to “somehow equate Zionism with National Socialism, Zionists with Nazis, or to portray this relationship as a willing and collaborative one between moral and political equals” won’t find what they’re looking for.

So it looks like Rania Khalek and her ilk are reduced to relying on books that, for good reason, are promoted by Nazi-sympathizers and Jew-haters…

But Khalek provided yet another example of the antisemitism that inevitably infects the efforts to present Israel as the Jew among the nations. The idea that the Jews are to blame for what’s wrong with the world and especially for whatever evil you suffer from or hate most has formed the core resentment of Jew-hatred throughout the centuries. The Nazis succinctly summarized it in the slogan “The Jews are our misfortune.” Khaled presented her version of this pernicious and ancient meme updated for the 21st century at an event organized by Students for Justice in Palestine at UC Berkeley earlier this week. The preposterous title of her talk was “Palestine: A Laboratory of Global Repression,” and the advertisement highlighted just how monstrously evil the world’s only Jewish state is [my emphasis]:

“What Israel does to Palestinians doesn’t stay in Palestine. Israel uses Palestine as a laboratory to test, refine, and showcase weapons of domination and control. These weapons are then exported around the world for use on other marginalized populations, from the killing fields of Gaza to the teargassed streets of Ferguson. Zionism is an engine for ‘combat proven’ repression technology that sustains racism and inequality across the globe.” 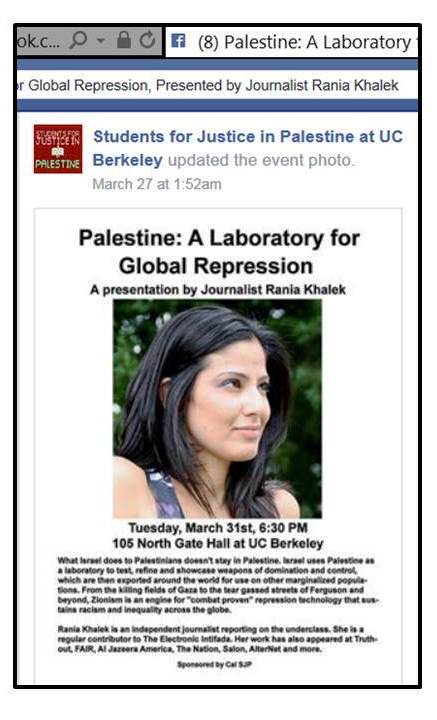 Khalek later retweeted a number of tweets posted by admirers who had attended her presentation, including one that cited her asserting that Israel was “becoming [the] ‘repression engine’ of the globe, spreading tech to maintain white supremacy world-wide.”

If antisemitism wasn’t such a lethal and still all too vigorous hatred, one could almost be amused: One day Rania Khalek relies on a site run by white supremacists to demonize Israel, and the next day she demonizes Israel for “spreading tech to maintain white supremacy world-wide.”

But of course, whatever Khalek’s twists and turns, her message remains the same: the Jewish state is our misfortune. If it wasn’t for Israel, who would ‘sustain racism and inequality across the globe?’ And, as one of her fans tweeted from her talk: “Opposing Zionism [is] not just important for Palestinian self-determination, it’s important for [the] self-determination of all oppressed.” Naturally, without Zionism the Kurds would have a state, as would the Baloch and the Tibetans and the people of Western Sahara and maybe even Iran’s Ahwazis; without Zionism, nobody would be oppressed – in short, a world without the Jew of the nations would be a much better place: it would be Juden-Staat-rein and its nations would live happily ever after in peace and prosperity, just as they did before there was a Jewish state…