It’s this time of year again when Palestinians and their supporters gear up to use Christianity’s most popular holy day for their own ugly political purposes. Elsewhere it may be the season of goodwill to all, but for the Palestinian Liberation Organization (PLO), it’s just another welcome opportunity to stir up ill will towards Israel and the Jews.

For this purpose, the PLO has just released a short animated clip, which the PLO Negotiations Affairs Department (PLO-NAD) helpfully tweeted with the hashtag #ChristmasUnderOccupation. 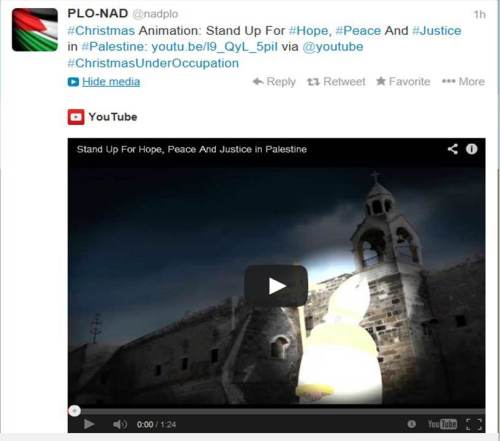 The clip shows Santa passing all the usual symbols of Palestinian victimization: the evil kippa-wearing Israeli settler, armed and accompanied by a fearsome dog; a checkpoint guarded by an armed Israeli soldier; a sad girl with her teddy bear in front of a ruined house, and of course the security barrier built in response to the terrorist carnage of the Al-Aqsa intifada. But the best part of the clip is arguably the short text that accompanies it, which explains that on Christmas, “Palestine celebrates the birth of one of its own, Jesus Christ.”

Perhaps one should view this as a huge improvement over some of the other “Jesus was a Palestinian”-fantasies that are part of the annual Palestinian Christmas propaganda routine – last year, for example, an op-ed in the official PA daily Al-Hayat Al-Jadida proclaimed:

Given that Palestinians are used to being indulged by the world, there is indeed no reason why they should care that elsewhere, practicing Christians acknowledge history and think that it is important to remember

“that the first Christmas was first and foremost a Jewish event. Mary, Joseph, the innkeeper, the shepherds, the baby: they were all Jewish. And as the baby Jesus moved toward adolescence and adulthood, it was Jewish religion, Jewish literature, Jewish culture and Jewish history that shaped his personality and his mind.”

The fact that the historic Jesus was a Jew is of course also reflected in the concept of shared Judeo-Christian values. But all this is merrily ignored by Palestinians and their supporters, who don’t seem the least bit embarrassed to press Jesus into the service of Palestinian nationalism – never mind the fact that the declared goal of this nationalism is a state with Islam as “the official religion” and the “principles of Islamic Shari’a” as “the main source of legislation.”

In this context, it is rather interesting to ponder the popular Palestinian propaganda fantasies about the terrible hardships that would be inflicted by cruel Israeli soldiers on a present-day Joseph and the pregnant Mary on their way from Nazareth to Bethlehem.  For this Christmas season, the PLO-NAD chose to retweet a tweet by the virulently anti-Israel (not to say antisemitic) website “If Americans knew,” which apparently sponsored a billboard in Atlanta depicting Joseph and Mary being blocked from reaching Bethlehem by the security barrier. 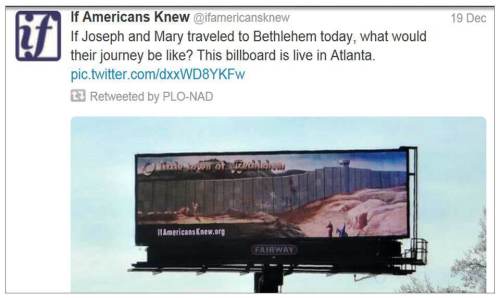 That Palestinian propagandists would choose such an image is a perfect illustration of their confidence that when it comes to maligning Israel, neither facts nor Christian beliefs matter. After all, the historical Joseph and Mary were Jews, and according to the Christian Bible, they travelled “out of the city of Nazareth, into Judaea, unto the city of David, which is called Bethlehem; (because he [Joseph] was of the house and lineage of David); To be taxed with Mary his espoused wife, being great with child.”

Can you imagine what would happen nowadays to a Jew from Nazareth who claims to be of the lineage of David and goes to Bethlehem because he regards it as the “city of David” and therefore his hometown?

I’m afraid the best case scenario is that the international media would denounce him and his pregnant wife Mary as extremist settlers who have only themselves to blame if anything happened to them and their newborn baby. And one thing is for sure: if this present-day Joseph tried to buy any property in Palestinian-controlled Bethlehem, any Palestinian willing to sell to him would risk being either lynched or sentenced to death for the crime of selling property to a Jew.

But the arguably most distasteful aspect of the annual Palestinian Christmas propaganda is the implicit belittling of the desperate situation of Christians all over the Muslim Middle East. To be sure, the West’s politically correct elites also don’t like to dwell on the fact that Christians nowadays suffer more persecution than any other religious group, and of course it counts for little that Christianity was born in the Middle East long before the region was conquered by Islam. By now it seems that the millennia-old native Christian communities may be facing the same fate suffered by the ancient Jewish communities of the Muslim Middle East. As Robin Harris put it in a Spectator column: “The ‘Sunday’ people are now following the ‘Saturday’ people out of the Middle East.”

Well, as a matter of fact, the “Saturday people” are still clinging to a tiny patch of the Middle East – and Palestinian propagandists work not just on Christmas, but all year round to create the impression that this is what ails the region.

First published at my JPost blog.