During the past week’s Presidential Conference in Jerusalem, I noticed several enthusiastic tweets about Ayaan Hirsi Ali’s presentation. One of her statements – arguably a characteristically politically incorrect one – seemed particularly popular with her audience: 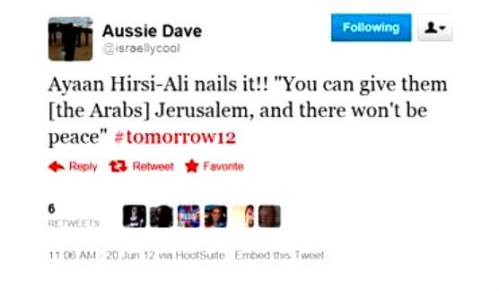 I was curious to learn more about her speech and the context of this statement, and while I couldn’t find an official recording or transcript, some of the bloggers who were in the audience provided their own partial transcripts or summaries.

Deena Levenstein, who criticized the conference for offering a too homogenous left-wing selection of (mainly male) speakers, highlighted Hirsi Ali as one of the few conference participants who didn’t necessarily “fit the mold.”

According to Levenstein, Hirsi Ali’s remark about Jerusalem came as response to suggestions for peace-promoting measures by veteran US Middle East expert Dennis Ross. In her presentation, Hirsi Ali had focused on three characteristics that she described as deeply embedded in Muslim societies: the absolute and unquestionable authority of the usually male power figures (e.g. father, husband, teacher, policeman, president); the dominance of a pride vs. shame paradigm and the related notion that the willingness to compromise is a sign of weakness; and the conviction that religious texts like the Koran and the Hadith offer solutions to every conceivable problem.

However, not everyone in the audience was positively impressed by Hirsi Ali. Writing in the Times of Israel, Shayna Zamkanei noted caustically:

“Cleverly, and unlike her co-speakers Ashkenazi, Ross and Wieseltier, Ali didn’t mention the Palestinians once. Yet, her entire talk centered on the Palestinian issue. Only winners and losers? Principle of non-compromise? Islamists? Listening to her talk, it would be easy to believe that secularists readily compromise, and that talking to Islamists is useless, even though both of these ideas have proven false. If we replaced in Ali’s speech […] “Muslim” and “Islamist” with “Jewish,” she would have been called anti-Semitic.

Ironically, at a conference dubbed “Tomorrow” and focused on Israel’s future and the need for communication within the region, we had a speaker hinting and miming that Muslims can’t be trusted unless they abandon their faith. While Ali’s talk focused on her challenges and inspiring triumphs, her broader message was nevertheless depressing, since it made sweeping and inaccurate generalizations not only about nearly half of the inhabitants of Israel, Gaza and the West Bank, but about a sixth of the world’s population. Paradoxically, the liberating lessons Ali drew from her own struggle would, if applied to Israel’s case, reinforce a siege mentality and a paranoia that Israel cannot afford.”

Given Hirsi Ali’s uncompromising views on Islam, her detractors can always resort to the charge of “Islamophobia.” But while reading Zamkanei’s negative take on Hirsi Ali, I remembered that just a few days earlier, I had come across a Ha’aretz interview with Sadakat Kadri, a British Muslim jurist and author of the book “Heaven on Earth”, which is described as “a critical insider’s respectful look at the history of sharia.”

Reading the interview, my impression was that Kadri is much more respectful than critical; yet, it seems that his take on the likelihood that the Muslim world will accept Israel doesn’t differ much from Hirsi Ali’s views:

[Kadri] “The idea that jihad can be a military struggle has always been around. There are at least four types of jihad: jihad of the tongue, hand, heart and sword. But jihad of the sword gets a new spin in the 14th century through Ibn Taymiyya, when the idea that you could defend yourself against the invader becomes important for the first time. After the Mongol conquest of Baghdad in 1258, this new idea of jihad as self-defense emerges, primarily through Ibn Tamiyya. It is then revived in response to foreign rule − during the 18th-century Saudi rebellion against Ottoman rule, for example, in the context of Muslim opposition to the British in India, and then in the context of resistance by Hassan al-Banna [founder of the Muslim Brotherhood] in the ’20s − which gets us toward the Zionist issue.
Because as far as the Muslim world is concerned, Zionism is just another form of colonialism.

Now I know that this is very contentious in Israel. But this is how it’s perceived in the Muslim world. And after 1948, all these interpretations of jihad evolve again, as a new idea takes hold. Jurists have historically characterized jihad as a collective obligation that must be directed by a Muslim ruler, to safeguard against freelance jihadis. But post-’48, that limitation falls by the wayside. When the Arab countries fail to stop Israel, they lose legitimacy. And what you get subsequently is a whole bunch of individuals and groups who take it on themselves to fight the jihad − who say it’s a personal obligation, binding on everyone, regardless of caliphs or rulers.

[Question] From a religious point of view, do you think it would be possible for a majority of Muslims, as Muslims, to accept Israel?

[Kadri] Well, the jurisprudence of jihad does contain the idea that a land that was once Muslim can’t be given up. That’s what the hard-liners draw on. But that’s been palpably ignored at times. Andalusia was once Islamic, but those extremists who might argue for its recapture today represent a minuscule minority. And though there are huge disagreements over the precise political compromises that Muslims can properly reach with Israel, Islamic jurisprudence does recognize the concept of the hudna, a truce. It allows for peace of limited duration, which can be renewed indefinitely. That’s how the Camp David Accords were given a religious imprimatur by clerics of Al Azhar in the late 1970s, for example. Insofar as there are people in Hamas who support truces, they also justify them on those grounds.

It’s true that jurists have ruled a hudna can’t last longer than 10 years at a time. But it can be indefinitely renewed. That would need corresponding gestures from Israel, of course, but it would potentially allow the benefits of peaceful coexistence to become more apparent on both sides.”

So here you have it: a “respectful” view of Islam’s stance toward the Jewish state boils down to the stance of Hamas – a truce or “hudna” can perhaps be negotiated for 10 years, and maybe it will be extended, but that would require “corresponding gestures from Israel.” In other words, Israel makes concessions when the “hudna” is first negotiated, and then every 10 years when it needs to be extended.

Kadri points to the optimistic scenario that this “would potentially allow the benefits of peaceful coexistence to become more apparent on both sides” – but potentially, there is of course also the pessimistic scenario that Hamas leaders mean exactly what they say when they declare over and over again that they will never recognize Israel. And who knows, maybe Egyptian supporters of the Muslim Brotherhood are resolved to demand the realization of the promised “United States of the Arabs” whose “capital shall not be Cairo, Mecca, or Medina. It shall be Jerusalem, Allah willing.” And maybe the many millions of followers of Sheikh Qaradawi share not only his conviction that Muslims and Jews are destined to fight each other, but also his hope that “the believers” will finish what Hitler didn’t accomplish.

As long as leading Muslim figures can propagate ideas like these without encountering widespread criticism and opposition in the Muslim world, Ayaan Hirsi Ali has a solid case for her sweeping criticism of Islam and she is right to warn Israel against naive hopes for peace as long as Islamists enjoy enormous popularity and support.