“This term sharia is the Arabic translation of the Hebrew word halakhah.” Linda Sarsour

Once upon a time, when being a leftist and a feminist meant something very different than what it means today, I happily considered myself both. But when someone like Linda Sarsour is cheered as a leftist feminist icon, I can only feel politically homeless: I want no part of Sarsour’s left, and I most definitely don’t support the crowd assembled by the notorious Pamela Geller for a protest that the New York Times (NYT) was only too happy to cover – after all, it was a good opportunity to tell readers that Sarsour’s “critics are a strange mix, including right-leaning Jews and Zionists, commentators like Pamela Geller, and some members of the alt-right.” Newsweek readers were also informed that “Feminist activist Linda Sarsour has become one of the far right’s favorite targets.”

As it happens, the NYT and Newsweek are simply parroting what Sarsour has told her fans countless times. The most recent example is a Facebook post from May 25, where Sarsour also claims that her evil right-wing detractors are using her “as a symbol to silence the communities I come from.” She then goes on to assert:

“When they chant or say they are ‘Anti-sharia’ that means anti-Muslim – plain and simple. This term sharia is the Arabic translation of the Hebrew word halakhah. It’s a set of guidelines that Muslims and Jews follow respectively. ‘Banning sharia’ means infringing on the rights of Muslims to worship freely – let’s call it out for what it is.”

I’m quite sure Sarsour is intelligent enough to know exactly what she’s doing by equating Islamic sharia and Jewish halacha.  She knows full well that, no matter how benign her own personal interpretation of sharia may be, the application of sharia results in terrible oppression and gruesome human rights violations all over the Muslim world. And she knows full well how disingenuous it therefore is to claim – as she also did when she recently re-tweeted one of her fans – that “Sharia is to Muslims what Canon Law is to Catholics what Halakah Law is to Jews.” And yes, I responded with a really snarky tweet. 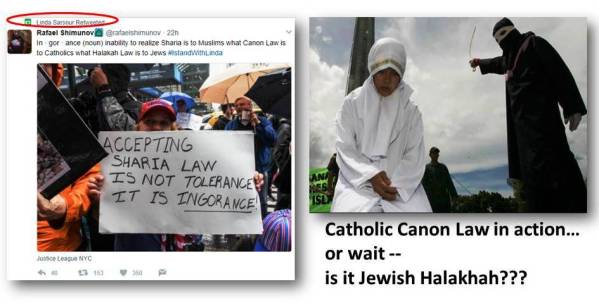 I’m not religious myself and neither qualified nor inclined to defend any religious laws – indeed, for someone like me, who was a leftist and a feminists before Sarsour was even born, it’s inconceivable to do so. To be sure, by now I’ve learnt to accept that many people find meaning in following the religious laws of their faith to a greater or lesser degree, and obviously, religious rituals can offer a lot of consolation to believers when life brings sorrow and bereavement. But that is no reason to forget that Christianity and Islam also have a very long and bloody history of religious coercion. That Sarsour insists on defending sharia while completely ignoring the sadistic cruelty of traditional sharia punishments and the misery that continues to be inflicted, particularly on women, in the name of sharia is one of the major reasons why I find it so appalling to watch her being made into an icon of everything that is supposedly progressive, good and just.

So I completely agree with Emma-Kate Symons – who must be a dreadful right-winger, but was inexplicably and scandalously allowed to criticize Sarsour in the NYT:

“Linda Sarsour is a religiously conservative veiled Muslim woman, embracing a fundamentalist worldview requiring women to ‘modestly’ cover themselves, a view which has little to do with female equality and much more of a connection with the ideology of political Islam than feminism. Could we imagine a wig-wearing Orthodox woman emerging from a similar ‘purity’-focused culture predicated on sexual segregation and covering women, headlining such an event [as the Women’s March]? No, because she is rightly assumed to be intensely conservative, not progressive on issues surrounding women’s roles and their bodies.”

Symons seems unrepentant, judging from her response to the NYT’s recent effort to promote Sarsour as a rising progressive star whose only critics are contemptible right-wingers. 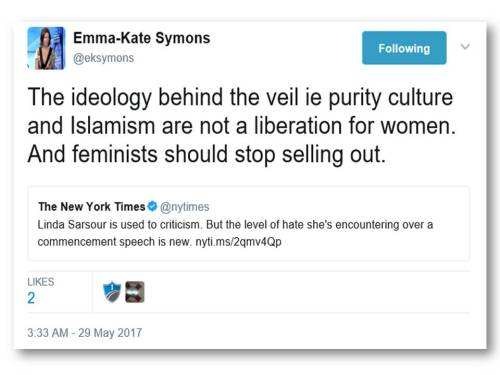 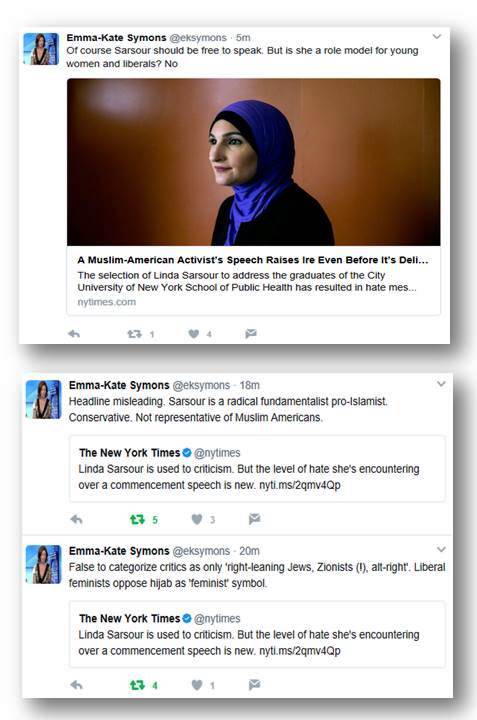 It may well be that Sarsour would argue that all the Muslim judges who use Islamic law to justify the oppression of women, or sadistic punishments like public floggings and beheadings, have no clue about sharia. I would be most happy if Sarsour embarked on a tour of the Muslim world to enlighten these guys – indeed, I hereby pledge that I would generously donate to help make such a tour possible.

Let’s conclude with a horrifying thought experiment: imagine the world’s only Jewish state would apply halacha as sharia is applied in Muslim states like Saudi Arabia or the United Arab Emirates. Is there anyone who believes that in this case, Linda Sarsour wouldn’t be very very busy denouncing Jewish law as a terrible human rights disaster that must be fought tooth and nail?